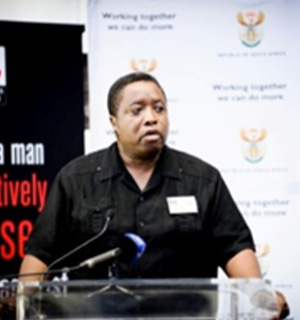 Bafana Khumalo is a member of the Senior management team at Sonke Gender Justice serving as a Co-Executive Director and as one of the organisations’ co-founders.

Bafana has a long and accomplished track record in the NGO sector. He was senior gender technical advisory for EngenderHealth South Africa between 2012 -2013.
From 2001-2008 Bafana served as a Commissioner at the National Commission for Gender Equality from 2001-2006 and 2007-2011. At the CGE he was instrumental in assisting National and Provincial Departments of Government to plan and coordinate many activities related to men, gender and HIV/AIDS.

Bafana has spoken at many national and international conferences on men, gender and HIV/AIDS, including the UN Commission on the Status of Women in 2007, 2008 and 2010, and at the International AIDS Society conference held in Mexico in 2008.